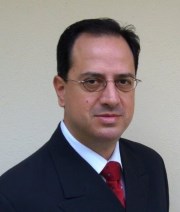 From 1992 till 1996 he was a research associate and consultant at various academic institutes (NTUA, ICCS, etc) and enterprises (OTE, AlgoSystems, etc). From 1996 till 1998 he was a scientific consultant to AT&T Bell Labs in the USA, and from 1998 till 2000 he was a system architect at Lucent Technologies in the Netherlands and from 2001 till 2002 the Technical Manager of the Communications Systems & Technology Group of Bell Labs EMEA. In 2002 he joined GRNET contributing to the development of European and Regional Networks and European Policies on electronic infrastructures. Since 2006 he is co-founder and Chief Strategy and Financial Officer at Corallia

He has served as an expert/consultant for the European Commission (DG CNECT, DG RTD, DG REGIO), Governments (Ireland, Greece), the European ICT Association (DIGITAL EUROPE), the Trans-European Research and Education Networking Association (TERENA) and various telecom companies and VCs. He has served in the Board of the Central and Eastern European Networking Association (CEENet) and the Alexander Innovation Zone of Thessaloniki (AIZ) and was a founding member of the eInfrastructures Reflection Group (eIRG). He has also served as the Greek National Expert on Research Infrastructures for FP6, at the Computing and Data Treatment Group of ESFRI and at the Scientific Technology Options Assessment  Group of the European Parliament.